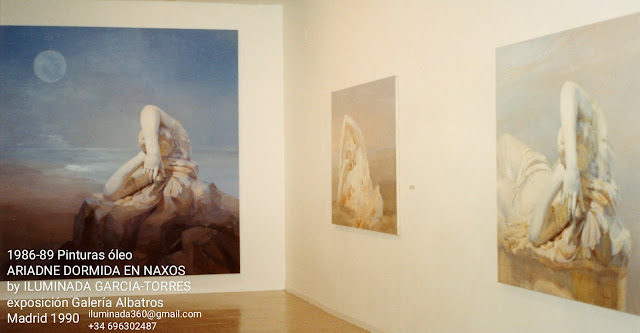 The immense risk of setting out across the waves
Text catalog Rosa Martínez de Lahidalga (1990)
... It is the Ariadne sculpture of the Museo del Prado, the marble sculpture that Velázquez brought from Rome and that he painted in his magnificent paintings of "Villa Médicis", the one that has inspired to ILUMINADA GARCIA TORRES(Elche1949) to draw Labyrinths in the Geometric Art.
She recovers in her paintings a metaphysics of space and form; of the transit with light and thought.
It can be done to transcend the simplest image if the brushstroke and the mind are able to raise it to the category level.
This is what happens with her pictorial compositions of cylindrical and cubic forms of reflecting light. They silence or reveal codes.
El inmenso riesgo de partir sobre las ondas
Text catalog Rosa Martínez de Lahidalga (1990)
Exhibition paintings by ILUMINADA GARCIA-TORRES
Galería Albatros. Madrid 1990
https://Pinturas-Geometrias-et-escultura-marmol-ARIADNE-MUSEO-del-PRADO/by-ILUMINADA-GARCIA-TORRES-exposicion-GaleriaAlbatros-Madrid 1990 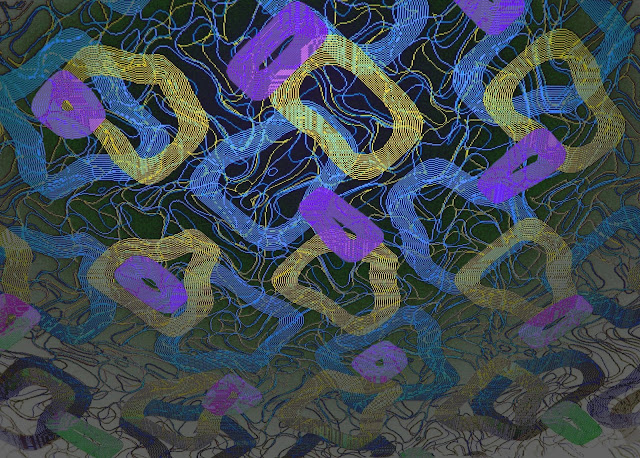 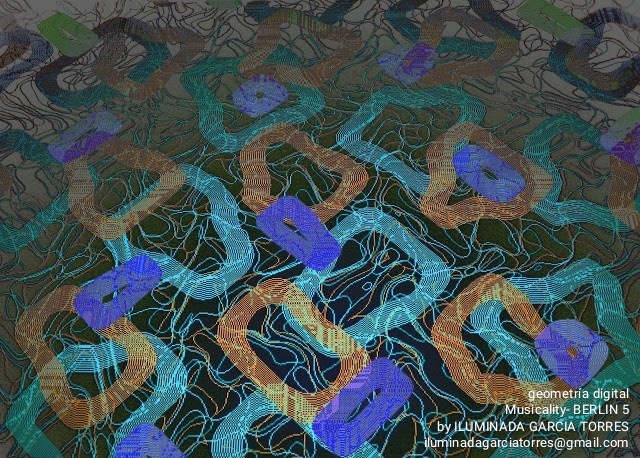 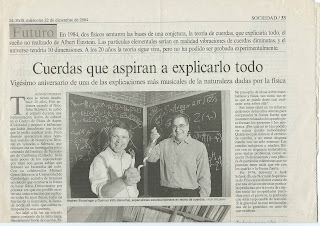 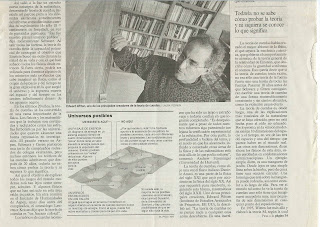 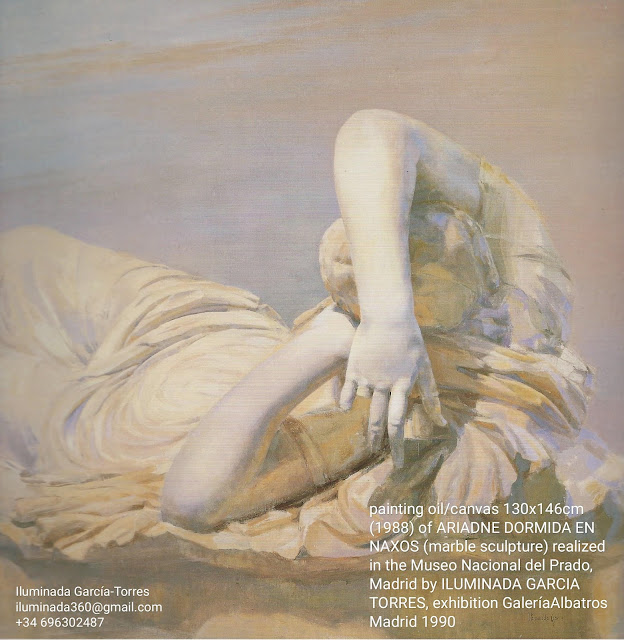 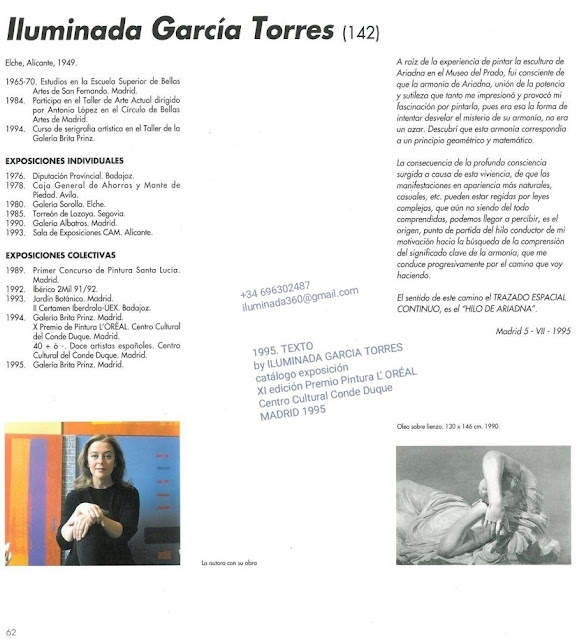 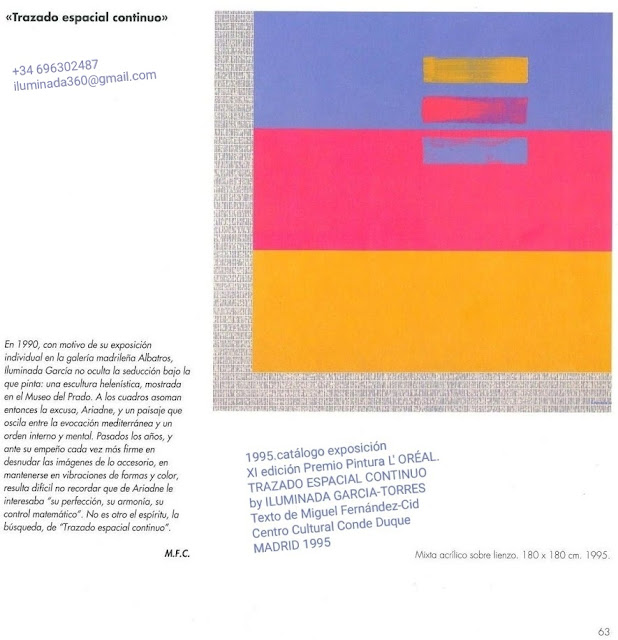 SOUNDS OF PAINTING (2004)
ILUMINADA GARCIA-TORRES, (Elche, Alicante, 1949) she has made a decided commitment to Geometric Art, developing orthogonally organized shapes and colors. Following paths already opened by the geometric Kandinsky of the German Bauhaus, author of POINT AND LINE ON THE PLANO, and Dutch Neoplasticism, ILUMINADA GARCIA-TORRES understands her painting and her sculpture as a mathematical system of proportions and geometric shapes.
ILUMINADA GARCIA-TORRES achieves to formulate, in 1991, a basic module of squares, where she drew the points and lines. This module will be the beginning of future experimentation in Geometric Art.
A geometric and mathematical cosmos, that ILUMINADA GARCIA-TORRES considers independent worlds, but participants of the totality. They are perfectly calculated according to systems of proportion in their measurements. The relation between full space and empty spaces is dialectically dynamic, because it generates multiple variations, determined by the color, shape, number, and direction of the lines, an interactive space that generates an integrating harmony of all the geometric elements in the composition..
The thread of Ariadna, is the generic name that has adopted to denominate to her work, inspired in the marble sculpture of Ariadna of the Museum of the Prado, ILUMINADA GARCIA TORRES discovered in this marble (1987) an harmony of geometric and mathematical order that went to preside over your future work. The space research has been formally complicating his proposals with a multiplication of rhythmic sequences, parallel to the world of music, pictorial geometries that she calls Continuous Spatial Tracing. From this proposal her work is incorporated into the new technologies applicable to the art of painting.
The recent works of ILUMINADA GARCIA TORRES, geometries of infinite development  of the combinatorial of color and the process of the image generated by computer where the brushstroke is now structured by the pixel (picture element), dot in a rectilinear grid of points to form a geometric digital image.
With this digital process of the image, she has made the geometries of the present exhibition Música y Arte II. They constitute the beginning of a new series whose dot of expansion is musicality.
ILUMINADA GARCIA TORRES has been able to see and work on the aesthetic aspects offered by the graphics of the musical notation. The pentagram or tetragram constitute the linear structure where the musical "signs" are deposited, she tries to evoke the true graphia, which allows it to develop formal investigations related to Optical art and suggest virtual movements.
Text by Laura Sanz García (2004) Carlos III University of Madrid
Pascual Patuel Chust University of Valencia
SOUNDS OF PAINTING  Exhibition catalog Música y Arte II.
Palau de la Música of Valencia 2004
https://Musica-Arte-II.catalogo46-triptico-digital-285x200cm-by-ILUMINADA-GARCIA-TORRES.Palau-Musica-de-VALENCIA-2004
1995·Texto by ILUMINADA GARCIA-TORRES catálogo Premio Pintura L´OREAL XI Edición. exposición Centro Cultural Conde Duque. Madrid 1995 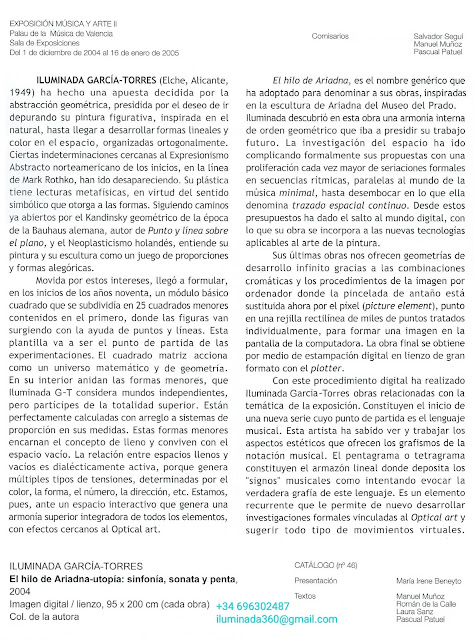 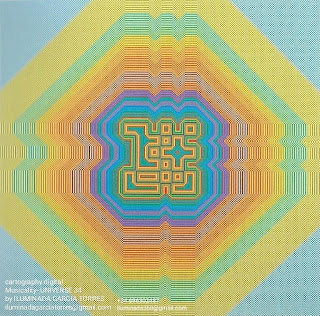 combinables.blogspot.com 1993 geometry
MARIA ILUMINADA GARCIA TORRES
1949 Elche Elx(Alicante) España
1965-1970 Studies Professor Drawing in the Academy of Fine Arts of San Fernando in Madrid and Faculty of Fine Arts COMPLUTENSE UNIVERSITY, MADRID. In the first course his teacher is the painter Antonio López García and in 1969 Eusebio Sempere, year that reconciled the teaching with the investigation in the Center of Calculation of the Complutense University of Madrid.

IluminadaGarciaTorres/continuous-mathematicsGeometry
IluminadaGarciaTorres/geometriaMatematicaContinuo
IluminadaGarciaTorres/-MathematicGeometryContinuous
catalogos-textos-art-drawings.blogspot.com
spatial-drawings.blogspot.com-blogs-texts
https://IluminadaGarciaTorres ​​2015
iluminadagarciatorres.blogspot.com
Texts written by art critics of exhibitions made by ILUMINADA GARCIA TORRES (ELX 1949) of Geometric Art: Pictorial, Sculpture and DIGITAL that she started in 1991 with the Geometries: COMBINABLES, TRAZADO ESPACIAL CONTINUO and THE THREAD OF ARIADNE-MUSIC, formulating continuous mathematics and geometry for her work. Previously, she worked 25 years (1965-1990) in painting, design of architectural compositions of geometry and in the two paintings, oil/canvas (1986-88) that ILUMINADA GARCIA TORRES made in the MUSEUM NAcional del PRADO (Madrid) of ARIADNE DORMIDA en NAXOS, marble sculpture. (exhibition paintings at the Galería Albatros, Madrid 1990).
​http://criticosartemadrid.es/index.php/noticias/464-iluminada-garcia-torres-geometria-color-y-musicalidad-diagramas-digital-y-pintura-1991-2015
contac iluminadagarciatorres@gmail.com
(+34) 696302487 geometric art
-blogs 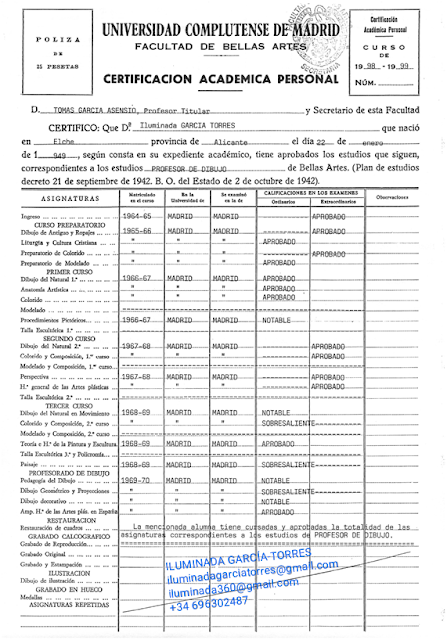 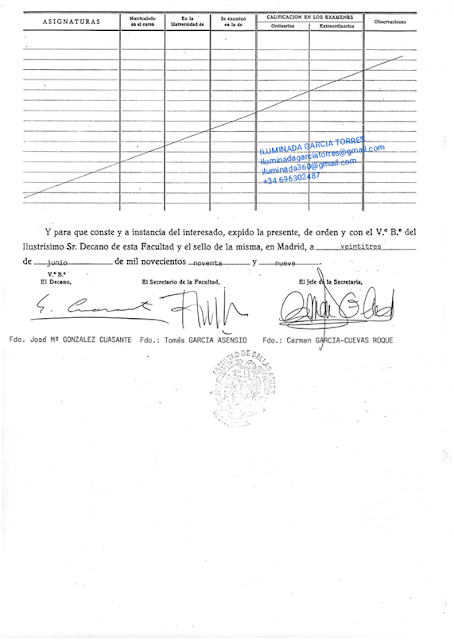